We are Honored to Receive the Best of Knot Award once again.
We want to extend a sincere “Thank You!” to the Many Brides Who
Spread the Good Word!

Another Exquisite Wedding at Church Landing in Meredith, New Hampshire!

To begin the New Year, on 1/1/11, we were honored to once again provide Live Music & DJ/Emcee Services at the Inn at Mill Falls in Meredith, NH.

This Site is One of Our Favorite Sites in All of New England. The Church Landing along with its sister site, The Chase House, are 2 places we’ve performed more than anywhere else in the Northeast! Their Staff, including Stacey Dumais and Hilary Thurston, are always the Perfect Blend of Professionalism, Friendliness, and Graciousness Everytime we work with them.

For This Wedding, we Provided Live Piano & Flute Music for the Ceremony in performance of Bach’s “Prelude in C” and Charpentier’s “Te Deum” among other Ceremony pieces.

Our talented Flutist, Daniel Bennett, switched to Saxophone for the Cocktail Hour as we Provide a Live Piano & Sax Jazz Combo for the Already-Vivacious Crowd!

The Bride & Groom, who were both Huge Fans of The Boss were introduced to “Out In The Street” from Springsteen’s Live in Madison Square Garden Album. Their First Dance was “Marry Me” by Train – a surefire hit for the 2011 Wedding Season upcoming!

The Crowd was Very High Energy despite this being New Year’s Day and Danced to Almost Anything We Threw at Them All Night!

The Last Dance was “Take Me Home Tonight” {Eddie Money} followed by an after-party at Guiseppe’s Restaurant in Meredith.

A Wedding we Performed at was Featured in Boston Magazine! 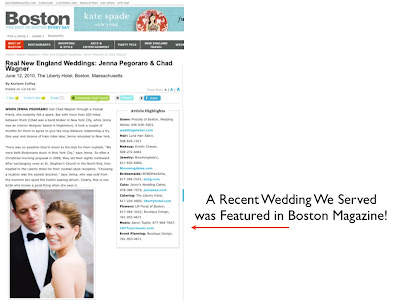 December 11th Wedding at the Hawthorne Hotel in Salem, Massachusetts!

On Saturday, December 11th, we performed at Jen & Mark’s Daytime Wedding at the Hawthorne Hotel in Salem, MA. The Hawthorne is a popular Northshore Wedding Venue with a Ballroom that overlooks the historic Salem Common.

For the Reception, we provided DJ/Emcee Services in coordination with the Hotel’s Friendly & Knowledgeable Events Staff. The crowd was largely from the Boston and New York City Areas and enjoyed plenty of Dinner Crooner Music along with the Bride & Groom’s favorite Chill Artists such as Dido and U2.

Dancing featured everything from Michael Jackson to Lady Gaga {and almost everything in-between} – what a great, young Dance Crowd!

A Wedding at Lake of Isles near Foxwoods in Connecticut!

On Saturday, November 27th, we performed at a Wedding in Stonington, Connecticut, right across the street from Foxwoods Casino!

The Lake of Isles Function Facility is one of the Most Elegant and Well-Run Wedding Sites we’ve experienced and this Ceremony & Reception was Spectacular.

The Ceremony took place in the Main Ballroom and featured Piano Music we performed by Steven Curtis Chapman & Johnny Cash!

For the Cocktail Hour, we performed Light Jazz Piano along with Piano Hits from Billy Joel, Elton John, Norah Jones, and Van Morrison.

The Reception featured a Great Dance Crowd from the Tri-State Area – never low on Energy or Enthusiasm, they danced to practically Every Tune from Oldies, to Classic Rock, to the Latest Hits from Rihanna and the Black-Eyed Peas.

We especially appreciated the Staff at the Lake of Isles and would Thoroughly Recommend the Site to Anyone in Eastern Connecticut, Central Massachusetts, or Western Rhode Island. The drive down I-395 from Central Massachusetts is unusually Stress-Free for a Southern New England Highway.

A Jazz Brunch Wedding at the Inn at Essex in Vermont!

On Saturday November 13th, we provided Emcee services along with a Piano & Bass Jazz Duo for a Wedding Ceremony & Reception at the Inn at Essex in Essex Junction, Vermont.

The Inn is home to the Vermont Culinary Resort and is one of the most popular wedding sites in the Entire State. Although November is definitely the beginning of the off-season, the Inn was jumping at 10am in the morning when we arrived.

Also unexpected was the near 60-degree weather.

For the Ceremony, we performed Solo Piano Music. The Bride & Groom were definitely Very Eclectic in their tastes and as such we performed Coldplay’s “Trouble” and Billy Joel’s “She’s Got A Way” for the Processionals. “Wouldn’t it Be Nice” by the Beach Boys was the Recessional.

The Reception took the form of a Jazz Brunch – the couple wanted a Live Jazz Duo for the Entire Reception with minimal Emceeing.

During the brunch itself, we performed a number of Sinatra, Michael Buble, and Ella Fitzgerald standards. Later on during dancing, we performed a Piano Adaptation of Incubus’ “I Miss You” for the First Dance, followed by Upbeat Swing & Rock n’ Roll Standards like “Rock Around the Clock”.

Everything ended later in the afternoon with the Last Dance: “New York, New York”, a salute to the Bride & Groom’s families who were all from the New Jersey/New York area.

On Saturday, November 6th, we provided Ceremony, Cocktail Hour, and DJ/Emcee Services for a Wedding at the Wachusett Country Club in West Boylston, MA.

The Bride & Groom had us perform Live Piano Music for their Ceremony & Cocktail Hour. Pieces for the Processional included “Canon in D” for the Wedding Party, and Beyonce’s version of “Ave Maria” for the Bride herself. The Recessional was “Lost in Love” by Air Supply.

The Reception featured a fun & festive crowd who danced to everything from “Runaround Sue” to “OMG”.

On Saturday, October 30th, we performed at a Filipino-American Wedding at the Ashworth By The Sea Hotel in Hampton, NH.

The Wedding itself took place at a Catholic Church in Exeter, NH.

We provided Live Cocktail Hour Piano Music and then DJ/Emcee Services for the Dinner/Dancing Reception. The Bride & Groom picked a wide assortment of Italian Crooners {for the Groom’s family} including Lou Monte & Dean Martin for their Dinner Music.

On of the highlights of the evening was a Same-Day Edited video presentation provided by Videographer, Jeff Brouillet.

Another Wedding at the Harvard Club in Downtown Boston!

On Saturday, October 23rd, we performed Live Piano Music & provided DJ Services for a wedding at the Harvard Club of Boston.

The Harvard Club features a breathtaking view of the Entire Downtown Boston Skyline and Boston Harbor and a Perfect Setting for an Evening Wedding Reception.

The Bride & Groom were married at Our Lady of Victories Catholic Church in the Back Bay. For their Cocktail Hour, we performed Jazz Piano music at the Harvard Club.

Later on, we provided DJ Services from the Introductions to the Last Dance. Throughout the night, we were accompanied by our friends at Zev Fisher Photography, one of Boston-area’s most in-demand wedding photographers.

The Crowd featured a crowd from all over the US and a large number of the Bride’s co-workers from the Beth Israel Deaconness Medical Center. They danced practically All Night!

A Boston Hilton Wedding with a Presidential Touch!

On Saturday October 16th, we performed at a Wedding in Downtown Boston at the Back Bay Hilton Hotel.

Everyone {including the bride} was a bit concerned about getting to the event as President Obama was set to lead a rally for Massachusetts Governor Deval Patrick right next door to the Hilton at the Hynes Convention Center.

We were amazed how easy it was to actually get to the wedding. There was a lot of traffic but the Boston Police kept everything moving smoothly.

We performed Live Piano Music for the Wedding Ceremony & Cocktail Hour. This included “Make You Feel My Love” and “When You Say Nothing At All” for the Wedding Processionals.

Later, we kept the dancing going until Midnight for a crowd that featured lots of New Yorkers, and lots of fellow graduates {along with the Groom} of Tufts University. We’re always delighted to play for the many Tufts crowds at weddings over the years!

The last dance was “Always & Forever” by Heatwave.